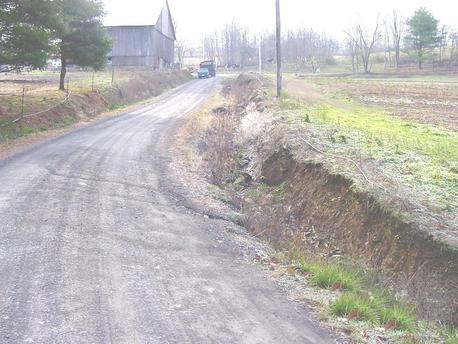 Sediment is the largest pollutant by volume to the waters of the Commonwealth of Pennsylvania.  20,000 miles of unpaved roads provide local service to Pennsylvania's rural residents and the major enterprises of agriculture, tourism, mining/mineral industries, and forest products. Although they are inexpensive to maintain, loss of fine materials from the roads and their drainage areas creates dust and sediment and act as collectors for runoff and sediment from adjacent land uses.

Dirt roads that are not properly maintained become large providers of dust and sediment.  Traditional practice in road maintenance has been to convey water along roads and deposit it into streams by the quickest means possible.
This practice results in increased flood flows in streams and transports sediment and a host of other pollutant into local waterways.  Runoff in our waterways depletes the oxygen levels, smothering aquatic life that supports our fisheries. ​
The Dirt and Gravel Roads Program, now known as the Dirt, Gravel and Low Volume Roads Program (DGLVR), was created to help maintain dirt and gravel roads and reduce pollution in our streams and waterways. The DGLVR Program follows a few key concepts includingThe low-volume paved road portion of the Program focuses on the same environmental improvements as the Dirt and Gravel Road portion, not just paving and repaving roads.  "Low volume" is defined as a sealed or paved road with an average daily traffic count of 500 vehicles or less. A “paved” road is defined to include any road surfaced with asphalt, “tar and chip”, “chip seal”, bitumen, concrete, or other asphalt-like coating.

For more information on the Center for Dirt & Gravel Road Studies, visit their website at www.dirtandgravel.psu.edu

The State Conservation Commission apportions Dirt, Gravel and Low Volume Road Maintenance funds to the County Conservation Districts. A Quality Assurance Board (QAB) has been created in Columbia County by the Columbia County Conservation District to establish and administer the grant program. The QAB is responsible to encourage local cooperation with environmental quality goals, to provide adequate opportunity for public input, and to ensure participation among a wide spectrum of environmental expertise at all levels of government.

The four-member QAB is comprised of:
-- A non-voting chairman appointed by the Columbia Conservation District Directors
-- One local representative appointed by each of the following entities:
To ensure equal access to the funds, the QAB establishes local priorities to prevent pollution as ranking criteria. To be eligible, projects must employ “environmentally sound” maintenance practices and products to correct pollution problems related to the roadway.  The QAB reviews and ranks the applications to allocate funding.
Click here to review the Columbia County QAB ranking criteria.
The QAB has established the following local policies.

Local municipalities and state agencies that maintain dirt, gravel and low volume roads are eligible to receive funding. However, to be eligible for the program, the participant must first attend a two-day training session for "Environmentally Sensitive Maintenance (ESM) of Dirt and Gravel Roads”.  The training is valid for five years.  Information about ESM trainings being offered can be found on the Center for Dirt and Gravel Road Studies website:  www.dirtandgravel.psu.edu

Once ESM training has been completed, applicants may submit an application package to the Columbia County Quality Assurance Board (QAB) at the District office to request funding.

Please contact Aaron Eldred at 570.317.9478 with questions or for more information.